Professor Jenny Graves from La Trobe University was honoured last week as recipient of the Prime Minister's Prize for Science. This is Australia's top science prize. The prize is in recognition of an outstanding career in science during which Professor Graves made a number of discoveries and generated many new insights to vertebrate chromosome evolution. She has transformed our understanding of how sex chromosomes work, and led to the realisation that the human male Y chromosome may be on a path of steady degeneration and possible extinction. 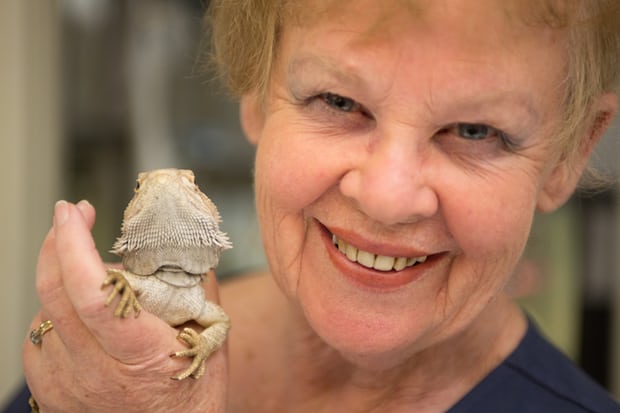 She contributed to the discovery, by her former student Andrew Sinclair, of the gene on the human Y chromosome that is responsible for initiating male sexual development. And in a paper in 2002, she proposed the hypothesis that the Y chromosome may disappear altogether in about 4.5 million years –- a finding she described as a “throwaway line” that received enormous scientific and public attention.

The paper discussed findings revealing that over the years the male Y chromosome had lost almost all its genes. Our non-human ancestors began with about 1,600 genes on the Y chromosome 166 million years ago. Today, it has lost all but 50 or so. If that trend continues, and if it is not rescued by chromosomal rearrangements, the "wimpy" Y chromosome could disappear in about 4.5 million years.

This appears to have happened already in some rodents and, happily for us males, the species live on, having adopted some other mechanism for ensuring the production of both sexes.

Professor Graves is a Thinker in Residence with the Institute for Applied Ecology at the University of Canberra, where she has contributed greatly to the discoveries of Team Pogona that have appeared in leading journals such as Science, Nature and Science Advances. In this, we have had first hand experience of the very positive effect that Professor Graves has on those around her, as an unwavering advocate for science and, in particular, an outstanding role model for women in science.

The celebrations finished with a special symposium on Genomics and Animal Conservation held in honour of Professor Graves at La Trobe University. The symposium was introduced by Keith Nugent (DVC Research, La Trobe) who made light of the "cover" of La Trobe's 50th Anniversary to organise the event while keeping the prize a secret. Neil Murray spoke on the history of conservation genetics in Australia, followed by Richard Frankham who outlined how genomics can contribute to conservation. He also took the opportunity to launch his and his colleagues new book on the genetic management of fragmented plant and animal populations. 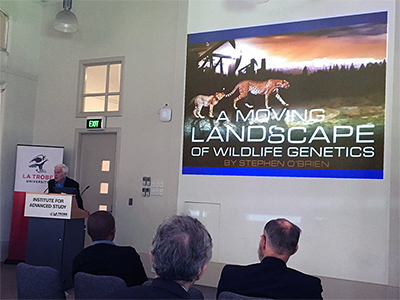 I followed with a talk on genetics, conservation and climate change, with lessons from the dragon, to resolve for many the mystery of why Jenny and the journalists that interviewed her were adourned with dragon lizards. Katherine Harrison presented a conundrum relating to genetic rescue of the helmetted honey-eater, and Andrew Weekes outlined successes in the genetic rescue of the mountain pygmy possum. Janine Deakin then spoke on her exciting discoveries of the impact of genomics on devil conservation, and Andrew Pask on the genomics of the Thylacine.

The symposium finished with an excellent talk from Stephen O'Brien on the greatest hits of conservation genomics, of which there are many and accumulating thick and fast.

We finished with a toast to Jenny's success, and we all look very much to a future where we benefit from her guidance, mentoring and contribution to our research, especially in Team Pogona.