Congratulations to IAE student, Duminda Dissanayake, on receiving a National Geographic Grant to progress understanding of sex reversal by temperature in the three-lined skink and the broader implications of sex reversal. 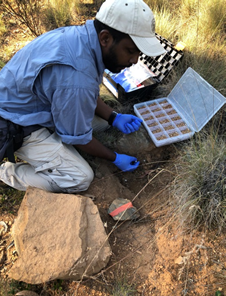 Duminda is a young herpetologist and conservation biologist from Sri Lanka who recently joined Team Pogona to pursue his PhD. He will use a multidisciplinary approach to investigate how environmental temperature and evolutionary processes converge to influence the dynamics of sex determination mechanisms and sex chromosome evolution in reptiles. He is both a lab based and field based project, working on a cline from the Australian Alps to Melbourne.

His study species, Bassiana duperreyi, is found in the ACT region and the southeast of Australia. They are considered to be of considerable importance scientifically because of their peculiar mechanism of sex determination. They have XX/XY chromosomes, like humans, with males resulting from the receipt of the Y chromosome from their father. However, this genetic mechanism is overriddent by temperature in the nest -- cold temperatures reverse the sex of XX individuals to male phenotype. 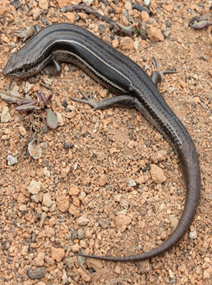 Funding from the National Geographic Early Career Grant will help him to lead a project and enhance the impact of his PhD. Watch this space.