Congratulations to Matt Young and Yolarnie Amepou on securing funding from the Mohamed bin Zayed Species Conservation Fund for their work in Papua New Guinea. The project is administered by the Institute for Applied Ecology at the University of Canberra in partnership with the Piku Biodiversity Network in PNG. 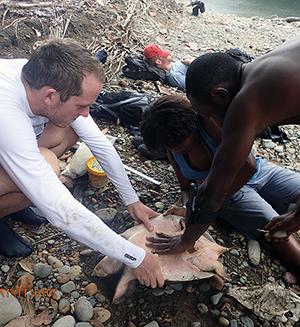 The broad aim of the program of activity on the pig-nosed turtle, in which this project is embedded, is to raise community awareness of deterioration in the rich environmental resources upon which they draw, to generate and disseminate new information on the causes and the means by which this can addressed, and to build constituency and capacity in the community to make and implement decisions on conservation management drawing upon the best available evidence.

Specifically, Matt and Yolarnie will be

Funding from the Mohamed bin Zayed Species Conservation Fund will accelerate progress and increase the viability of this conservation and research project by enabling us to conduct on-ground conservation fieldwork in Papua New Guinea.

The team heads bush in early January 2018 to meet with communities, first in the Vailala River, via Kerema. We wish them safe travels.