Hemiclonal Gudgeons -- for those who thought sex was simple

Posted in Conservation Genomics on Mar 19, 2019

Biologists across many fields regard the extinction of a species as a landmark event, and extinction has been the subject of much theoretical and practical research in ecology and evolution. Although a few researchers have speculated on how we might resurrect iconic extinct species such as mammoths, thylacines, and dodos, most see extinction as a final, irreversible endpoint. However, there is a category of little-considered exceptions, namely that of 'ghost' or 'semi-living fossil' species. These ghost species remain cryptically 'alive' as hemiclones, where their genome is perpetuated clonally with a related sexual species. This sexual parasitism opens the possibility of de-extinction of such ghost species without genetic engineering, a far more realistic prospect for than for fully-extinct taxa.

In a paper that appeared this week in Scientific Reports, Peter Unmack and his colleagues describe work done at the Institute for Applied Ecology, University of Canberra, on a hemiclonal 'ghost' lineage of gudgeons (genus Hypseleotris, photo above). They identified a vulnerable sexual population in one tiny portion of the extensive distribution involved in two hemiclonal lineages and provide perspectives on several important issues not previously explored by other studies on ghost species, but relevant to their detection, conservation, and artificial recreation.

So how does hemiclonality come about? The conventional view of sexual reproduction is that offspring receive half of their genetic material from one parent and half from the other. After all, we all have a mother and a father, and can see genetic contributions of each in ourselves. Essentially, at conception, the sperm brings a haploid set of chromosomes to join the haploid set in the ovum to ensure the new life has a full complement of chromosomes. 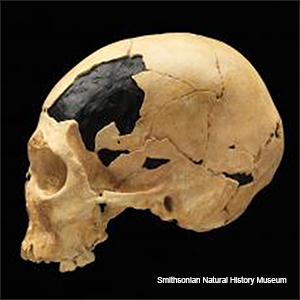 Hybridization occurs when individuals from two distinct species mate to produce viable offspring. This can occur when the two species are only partially reproductively incompatible. The offspring receive half of their chromosomes from one parental species and half from the other. This happened in humans when those fresh out of Africa mated with Neanderthals (or Devisovans) (suspected hybrid, photo right). Neanderthals and Devisovans had previously dispersed out of Africa where they diverged and speciated (?) during isolation. Apart from humans in Africa or their direct descendants, we all have a Neanderthal component in our genomes. 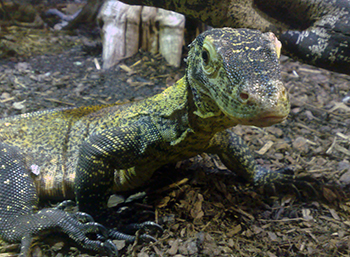 The outcome of hybridization does not always progress in this manner. Hybridzation between two species or lineages may result in unisexual lines. There are three primary types of unisexuals: parthenogens, gynogens and hemiclones. In parthenogenesis which, among vertebrates is largely restricted to reptiles, unisexual lines can be established and persist without the involvement of males at all. We see this in many lizards. Indeed, it can be facultative, where female Komodo dragons (photo left) held in isolation can throw a viable clutch of offspring without the involvement of a male, and some of the offspring are male! How clever is the blind watchmaker.

In gynogenesis, both sexes are required, but sperm from a male only triggers development of the embryo, but does not contribute genetic material. The embryos are all clonal and identical to the mother. The contribution from the father is lost.

So far so good. Sexual reproduction and unisexuality would seem to form a nice dichotomy – you receive your genetic material from mum and dad; or you receive it parthenogenically just from mum, or gynogenetically with a mum and dad, but only mum’s DNA is passed on. 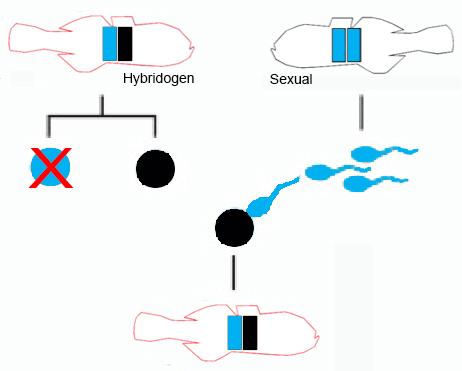 But hemiclones make it really interesting. In hemiclonal species half the hybrid’s genome is passed on clonally to the offspring without any recombination while the other genome, inherited from the sexual individual, is replaced every generation (either parent can be male or female in our fish, but males are very rare in other hemiclonal complexes). The sexual is a parent to its offspring, but will not be the grandparent unless it mates again with its own hybridogen offspring. The hemiclones appear like F1 hybrids, but with ghost lineages one of the species involved in the hybridization is nowhere to be found. It has become technically extinct, but lives on as a parasitic genome in the remaining living species.

I leave it to you to read our paper in Scientific Reports and the recent mini-review by Lavanchy and Schwander (Current Biology, 2019 29:R9-R11), but the work raises a number of interesting demographic and evolutionary questions. The hybridogenetic haplogenome gains a transmission advantage, as it is being transmitted to 100% rather than 50% of the offspring, and will persist through time. Hybridogens could therefore quickly establish themselves among their sexual hosts. However, hybridogens rely on their hosts for reproduction, and must co-occur with them. Because of the transmission advantage, hybridogens should to rise in frequency at the expense of the hosts, ultimately supplanting their hosts then themselves going extinct. Why are they not transient, short lived entities that go extinct before being noticed?

Does the unpredictability of the Australian environment provide a temporal mosaic which at times favours the sexual over the hybridogens to offset the transmission advantage possessed by the latter? Because there are two sexual species involved in the Gudgeon case, is there host switching going on that could relieve competitive pressure on one or the other of the host species when their abundance declines?

How is it that there are male and female hybridogens, but the ghost species remains a ghost?

These are interesting questions for the future, and the Australian Gudgeons are a great model with the potential to provide the answers. Peter Unmack and his team are on to it.