Congratulations to Sarah Whiteley and Duminda Dissanayake on the receipt of CSIRO Scholarships in support of their PhD work. These scholarships carry both a top-up to living allowance and generous project funding. 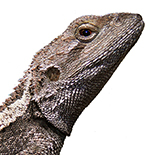 Sarah also recently learned that she was awarded a PhD scholarship from the University of Canberra, to complement the CSIRO top-up, so congratulations also on that front. She will be working as part of Team Pogona on the molecular mechanisms of sex determination in the Jacky Dragon Amphibolurus muricatus under the supervision of a panel to be drawn from Clare Holleley (CSIRO), Craig Smith (Monash University), Vera Weisbecker (UQ) and Arthur Georges. 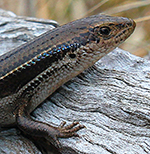 Duminda is on a W.J. Weeden Scholarship with UC and is working again as part of Team Pogona on the mechanisms of sex determination in the three-lined skink, Bassiana duprereyi under the supervision of Clare Holleley (CSIRO), Janine Deakin and Arthur Georges. His is both a lab based and field based project, working on a cline from the Brindabellas to Melbourne. 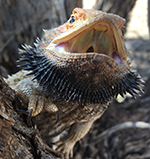 Sarah and Duminda join Meghan Castelli who is also on a joint UC/CSIRO scholarship working on the molecular basis of sex determination in the central bearded dragon Pogona vitticeps, and the geographic distribution of sex reversal. She is supervised by Clare Holleley (CSIRO), Kerensa McElroy (CSIRO) and Arthur Georges.

With implications of their work for conservation challenges under environmental change, all three students will be members of the Centre for Biodiversity Analysis which, from this year, is a joint initiative of the ANU, CSIRO and UC.

We wish them well in their studies, made possible by our growing collaboration with CSIRO on a range of fronts -- sex, eDNA, invasive vertebrate pests and the CBA.