Australian Turtle on the Brink

Posted in Conservation Genomics on Nov 30, 2018 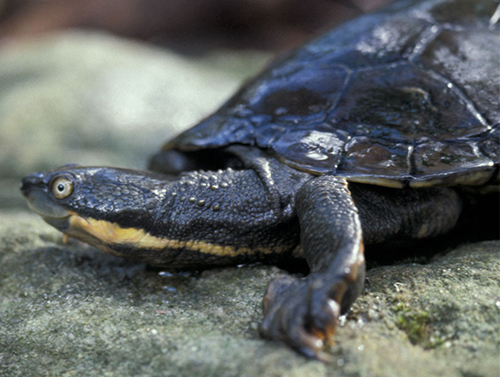 The Bellinger River Sawshell, Myuchelys georgesi, is facing some serious challenges. The species is one of several Australian relictual species, relictual in the sense that it represents a lineage of considerable antiquity – a glimpse into the past. It has recently moved from being secure to being Critically Endangered and listed among the 25 most endangered turtles in the world.

In an article that appeared this week in the journal Endangered Species Research, we report the disturbing observation that the endangered endemic Myuchelys georgesi is hybridizing in the wild with the locally introduced Emydura macquarii, which threatens Its very existence. You can download our article here, but read on for the full story.

Now restricted to about 60 km of a small coastal drainage in NSW, the Bellinger River, Myuchelys georgesi was vulnerable even before the arrival of European settlers. Since then, the story of this interesting little turtle has gone from bad to worse.

The Bellinger River is a rain-fed oligotrophic stream originating in the New England tableland and flowing over a rocky bed for much of its length into the Pacific Ocean. Before European settlement, the stream would have been bordered by a dense riparian vegetation weaving its way through wet sclerophyll forest on the moderate flood plains. Clear water flowing through pools punctuated by active riffle zones, gravel sandbanks, and a rich riparian vegetation of fruiting and flowering trees often overhanging the water is a habitat particularly suited to species in the genus Myuchelys. Sawshells are essentially stream dwellers, occupying the tributaries of many rivers of eastern and northern Australia. 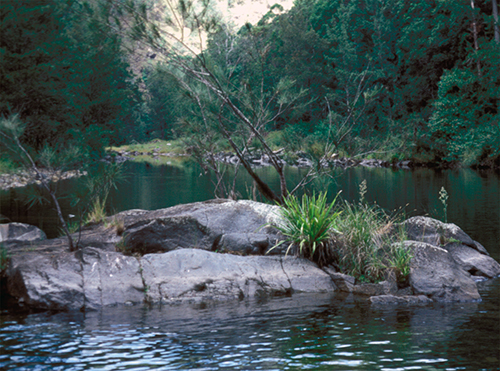 Land clearing, often down to the waterline, led to increased sedimentation, sand rather than gravel banks, and loss of an important source of food – windfall insects, fruit and flowers. A more open waterway and sandbanks are more suitable to other species of freshwater turtle, such as the river turtle Emydura macquarii, which is abundant in the rivers to the north (Clarence R.) and the south (Macleay-Hastings rivers). One way or another, this second species has found its way into the Bellinger River now more suitable for its establishment, and numbers of the native but exotic species are on the rise.

We know the Emydura are introduced because of their unusual genetic profile. The diversity of mitochondrial haplotypes suggests introduction from a variety of sources, and the fact that no major mitochondrial haplotype is endemic to the Bellinger River is consistent with introductions. At least one case of human-mediated dispersal of Emydura macquarii, from the adjacent Coffs Harbour region, is well documented. And of course, the species was not recorded from the Bellinger River before a specimen was caught by Peter King in the 1980s despite some serious surveys. Now they are easy to come by.

The establishment of Emydura macquarii in the Bellinger River in the 1980's and its progressive increase in abundance in the river since that time is placing pressure on the endemic Myuchelys georgesi. First of all, they eat similar foods, which in an oligotrophic stream, are likely to be limiting. Increases in the numbers of Emydura, if food is a limiting factor, will almost inevitably lead to pressure and declines in Myuchelys georgesi, compared with pre-1980s numbers. 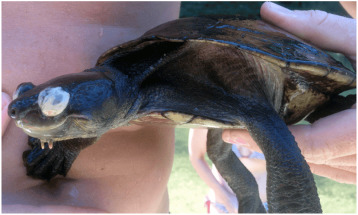 In February 2015, a novel virus decimated the population. Almost every adult was extirpated from the Bellinger River – only juveniles appeared unaffected. And as sod's law would have it, the exotic Emydura macquarii is unaffected. This viral infection has brought Myuchelys georgesi to the brink of extinction. Whether competition with the Emydura had a hand in moving some Myuchelys to a weakened state is not known. Nor do we know why the juvenile Myuchelys seem to be unaffected by the virus. The concern is that when they approach adulthood, they may too succumb.

The bad news for this species continues. In a recent study, we showed that Emydura macquarii and Myuchelys georgesi hybridize in the wild, despite they distant relationship. The hybrids are fertile because we found evidence of backcrossing. Indeed, all of the Myuchelys georgesi in the Kalang River, a tributary of the Bellinger River isolated from it partially by the coastal estuary into which they both discharge, were either hybrids or backcrossed individuals. This admits the real possibility that Myuchelys georgesi will become genetically swamped by hybridization and introgression with the exotic Emydura macquarii.

So if competition for limited resources does not get it, or the virus does not get it, then Myuchelys georgesi runs the real risk of being obliterated by genetic swamping. After having persisted for many millions of years in the Bellinger River, and perhaps once more widely, alterations to its habitat, introduction of an exotic virus, and a new competitor seem destined to push Myuchelys georgesi to extinction.

All is not doom and gloom. The NSW Office of Environment and Heritage and Taronga Zoo have established an insurance colony, albeit a handful of individuals, collected before the virus spread to all corners of the Bellinger River. They are virus free, breeding well, and our genotyping has shown that their genetic diversity is similar to that of the population before the virus struck. Some hatchlings are now ready for release. Discussions are underway on how to manage the exotic Emydura macquarii in the Bellinger River. Hopefully, with some careful nurturing and solid community support, we can bring Myuchelys georgesi back from the brink.